With the current attempts of the ‘Bitter Together’ campaign to scare and frighten the Scottish public into remaining a part of the UK resulting in a spectacular reversal of fortune and a significant narrowing of the gap in the opinion polls between the yes and no campaigns, the Scottish independence referendum in September could yet be a genuinely gripping event. An interesting article appeared in the Guardian at the beginning of March with Barney Ronay claiming that Scotland had declared football independence from the UK, but especially from England, decades ago. World-class Scottish players are in short supply, the national team has failed to qualify for any international tournament since the World Cup in 1998 and, apart from a few key Scottish managers, there has been a significant lack of Scottish playing presence in the so-called ‘greatest league in the world’ recently.

However, it wasn’t always thus. Clearly Celtic’s famous 1967 ‘Lisbon Lions’ triumph is well documented, but it wasn’t a one-off. Rangers lifted the Cup-Winners Cup in 1971 and Aberdeen, led by Alex Ferguson, did the same in 1983 courtesy of a 2-1 victory over Real Madrid; they also won the European Super Cup later that year. The Scottish national side qualified for five successive World Cup competitions between 1974 and 1990 and, as Ronay also pointed out in his article, when English teams dominated the European Cup between 1978 and 1984, Liverpool, Nottingham Forest and Aston Villa had at least three Scots in their triumphant teams, five featuring in the ill-fated final of 1985 at Heysel.

All of which brings us to a significant, and now mind-boggling, thirtieth anniversary this April. Dundee United – then as now, a team from the Scottish Premier League – should and could have reached the European Cup Final in 1984. Under the idiosyncratic leadership of Jim McLean, United had lifted the league title for the first time in its history in 1982-83 playing a flamboyant and free-flowing football which secured them a record number of points and goals scored. Having dispatched the Maltese Hamrun Spartans and Standard Liege with ease in rounds one and two of the European Cup, the Terrors edged past Rapid Vienna on away goals after the tie had ended 2-2 on aggregate. The semi-final tie brought a severe test, pitting McLean and his emerging side against AS Roma, then boasting the talents of Brazilians Cerezo and Falcão, not to mention Italian internationals in the shape of Bruno Conti, Francesco Graziani and Agostino Di Bartolomei. However, Dundee United had some fine players of their own: Paul Hegarty and David Neary formed the fulcrum of the defence, supplemented by a young Richard Gough and Maurice Malpas, while the midfield was packed with ingenuity and playmaking with Eamonn Bannon, Ralph Milne and Paul Sturrock providing regular service and assists for the spearhead, Davie Dodds.

And a severe test it proved in the first leg at Tannadice Park on 11 April 1984. After some early pressure from Roma, Dundee United gradually took control of the game with a fluent passing style and could have added to the two goals from Dodds and Derek Stark. United ran Roma ragged: they were tireless, prompting McLean to remark afterwards that he didn’t care what pills that his players were on as long as they kept taking them! However, this flippant remark sparked controversy as the Italian sports pages reported that the United players were a collection of drug addicts and that McLean openly admitted it. Furthermore Roma players claimed that McLean had insulted them by calling them ‘Italian bastards’ at the end of the first leg. 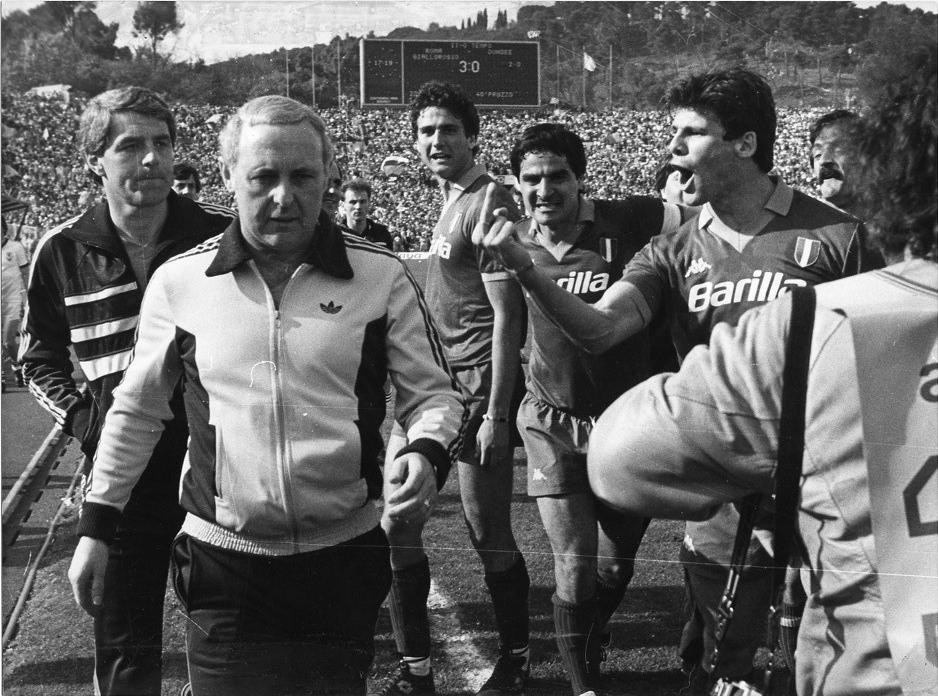 The cup final was to be held in Roma’s Stadio Olimpico, and it was unthinkable that Roma wouldn’t reach it. The second leg of the semi-final was held at that stadium two weeks later, on 25 April, and was mysteriously allowed to kick off at 3pm in the heat of a Roman spring which clearly didn’t suit the men from Tayside. The stadium was full hours before the match started and was a seething pit of hatred, as displayed on the banners waved by Ultras proclaiming ‘God hates Dundee United’, ‘Fuck off McLean’ and ‘Dundee, be careful: Wolves still hungry’. 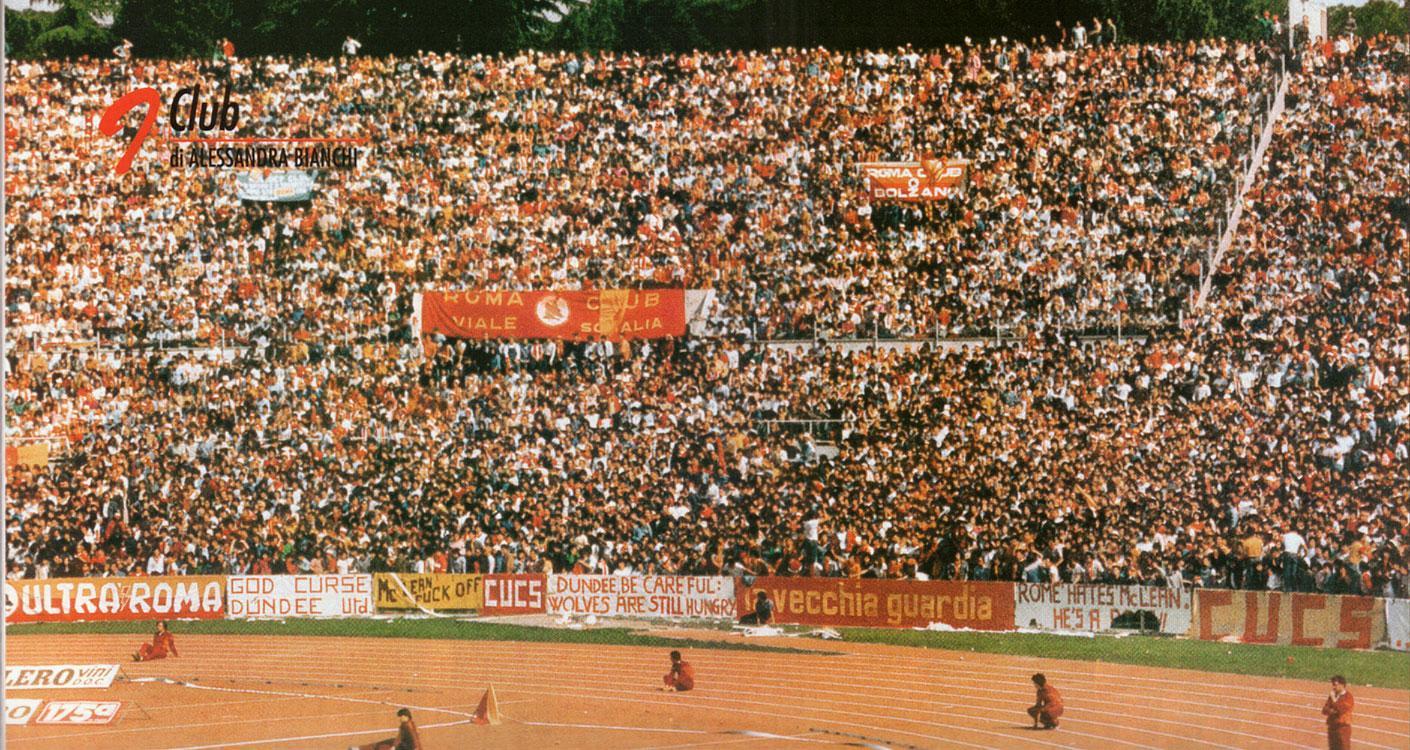 Roma dominated the game. Roberto Pruzzo scoring two goals within the first 38 minutes, two further Roma goals were chalked off in either half and the tie was finally killed off in the second half as Di Bartolomei dispatched a hotly disputed penalty past a helpless Hamish McAlpine. United played poorly on the day and saw a golden opportunity to progress to the pinnacle of European football ebb away. At the final whistle the stadium erupted, and McLean and his young assistant, Walter Smith, were subject to some fierce barracking, swearing and an assortment of obscene gestures – and that was just from the Roma players!

It was the postscript to the game that really left Dundee United feeling aggrieved. It was widely reported in 2011 that former Roma director, Riccardo Viola, admitted that the French referee, Michel Vautrot, was offered 100 million lire (£50,000) prior to the semi-final second leg. Controversy still abounds over whether the bride was accepted. At the time the Scottish FA representative, Ernie Walker, demanded an inquiry into the match and, more recently, former United winger Paul Sturrock wrote to UEFA President, Michel Platini, demanding that the result be stricken from the records and, somewhat optimistically, requesting the players receive runners-up medals.

Roma went on to face Liverpool in the final of the European Cup on their home ground in May 1984 but met their match and came unstuck – but that is another story. Dundee United meanwhile reached the acme of European success in their 1986-87 UEFA Cup campaign, in which they beat the much-fancied Barcelona in the quarter-finals in both home and away legs, the only British club ever to achieve this. They were eventually beaten 2-1 over two legs by IFK Gothenburg in the final. Jim McLean finally retired as manager after 22 years in 1993.

For all their ups and downs over the past thirty years, Dundee United have never played a European Cup/Champions League tie since that afternoon in late April in Rome.