A game of three halves

3sided football has been revolutionising football in different countries. Philosophy Football FC has been at the heart of it.

STOP PRESS: watch the BBC's video of our most recent 3sided match here.

For a good overview of 3sided football, watch this short documentary: 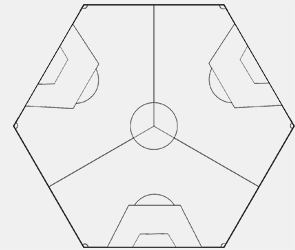 3sided football was conceived in the 1960s by the Danish Situationist Asger Jorn. In this game, three, not two, teams would strive on a hexagonal pitch, collaborating rather than merely competing, and agreeing amongst themselves what was allowable and not allowable, rather than being controlled by an outside force. In other words: no rules, no refs.

However, the game remained only a concept until the 1990s, when the Luther Blissett collective in Italy started organising occasional games. Since then, it has been played a handful of times in various countries.

In 2010, Sally O’Reilly, then writer in residence at Whitechapel Gallery in east London, organised a 3sided match to take place during the campaign for the general election in the UK, in which three teams would represent the main political parties in a game designed to demonstrate the shifting allegiences and balance of power in party politics. Knowing Philosophy Football FC as a club which looks to use football as an expression of political and cultural ideals, she approached the club to take part, and to formulate a set of rules which could be used in a real situation. 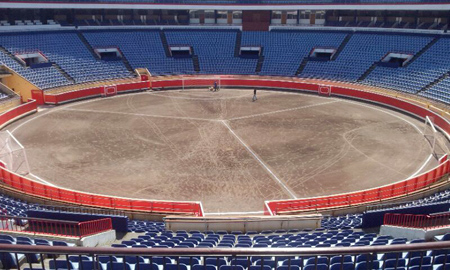 The Plaza de Toros in Bilbao marked out for a 3sided football match in which Philosophy Football FC played, June 2012

The set of rules proposed for the Whitechapel match was minimal:

1. Scoring
A team does not count the goals it scores, only the goals it concedes. The winner is the team that concedes the fewest goals.

2. Throw-ins / goal-kicks / corners
On the hexagonal pitch, each team has two sides of the six-sided pitch: the side with the goal (the 'backside') and the side opposite to your goal (the 'frontside'). If the ball goes out on one of your two sides, you get the throw-in / goal-kick. If it went out off you, the throw-in or corner goes to the team whose own goal is nearest to where the ball went out.

3. Referees
While there is a temptation to have no referees with the following dictat in mind: 'The game deconstructs the mythic bi-polar structure of conventional football, where an us-and-them struggle mediated by the referee mimics the way the media and the state pose themselves as "neutral" elements in the class struggle', the match will have two referees, able to make discerning philosophical judgements.

4. Duration of match
Ideally, teams will play until people get bored, start to wander off, fall asleep etc: however, three thirty-minute 'halves' with teams rotating goals would work well.

A new pitch layout was designed for this match, which owed more to the layout of the traditional football pitch, with goal and penalty areas, than Jorn’s cruder divisions.

You can read more about this match here.

Philosophy Football FC, inspired by the possibilities of developing another kind of football: one not dominated by either brutal attempts at domination on the field nor by the kind of corporate and individual greed which has now over-run professional football, has since sought to develop the concept of 3sided football into a real game. We have played several subsequent matches: a 'Philosophers' 3sided Football Match' in Madrid in May 2011; another in Rome in November that year; one in Bilbao's Plaza de Toros against a team representing Athletic Bilbao and an immigrants' team; and the club also took part in a 3sided football tournament in the 2012/12 pre-season. Links to these matches are below.

In May 2013, we organised a major event in London: an international 3sided football tournament, which got coverage in the Guardian newspaper. Read more about it here.

Here is a short video of the Philosophers' 3sided Football Match in Madrid:

The Madrid match was the first known to have been played on Spanish soil, but the concept has since taken off in that country, with Athletic Bilbao recently announcing that they would be using 3sided football as part of their ‘Thinking Football’ campaign. Guardian journalist Sid Lowe played in the match, and has written about this phenomenon in this article.

At the end of 2013, Philosophy Football FC established the International 3sided Football Federation to promote this form of the game.

To find out more about 3sided football and the International 3sided Football Federation, contact Geoff Andrews or Ally Clow.

3Sided Football World Cup, Silkeborg, May 2014. Read the report in the Morning Star by our keeper, Kadeem Simmonds.

During the 2014/15 season, Philosophy Football FC is participating in the inaugural Luther Blissett 3Sided Football League, with matches taking place on the first Sunday in each month and played in Fordham Park, New Cross at 2.00pm. You can see a video of one of these matches here.