The three sides of Madrid

Philosophy Football FC embarked upon their 17th tour to spread the beauty of Danish Situationist Asger Jorn’s creation, three-sided football. This wasn’t so much an expansion of north European cultural imperialism but instead an outreach of solidarity, satire and internationalism. The destination, timing and principles of the tour proved to be very apt - an opportunity perhaps to present an alternative to what became a real low mark in footballing relations between Barcelona and Real Madrid. 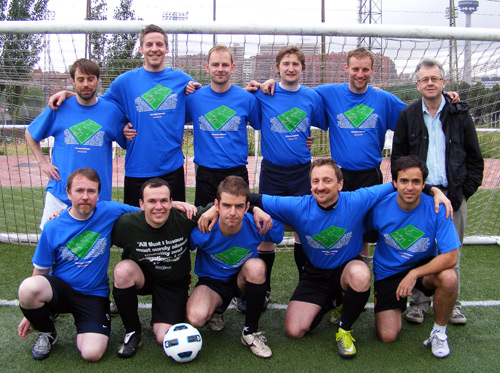 The trip got off to a good start with a couple of star-spotting opportunities. Owen saw Michael Palin at Victoria station – a particularly auspicious omen, since the philosophers were equipped with Hugh Tisdale’s wonderful T-shirts celebrating Monty Python’s international philosophy football match sketch. Inspired by spotting Olympian James Cracknell, Henry, Will and I were feeling the excitement of embarking on our first Philosophy Football tour.

Ably assisted by a few anonymous team members I cheekily managed to glance at the itinerary of a very engaging group of ladies on a weekend hen do. One word leapt from the page: Rezmez. What could it mean? The mystery deepened during heated discussion while in the air ... what is the Rezmez? who is the Rezmez? could we use the Rezmez to our advantage in the football? To this day I am completely ignorant as to whether Rezmez might be a mode of existential thought ...

We met Filippo in a showery Madrid, and he led the tour party to a superb pizzeria and, as the early hours of the morning approached, many opted for the bright lights of downtown Madrid.

The rain in Spain falls mainly on the game

When we awoke to heavy rainfall, there was some concern over whether Spain’s inaugural three-sided football game would actually take place. Thankfully the skies cleared enough for all three teams to descend on Stadio Centro Deportivo Municipal la Elipa. London’s Thinkers took to the field in a blue Monty Python strip to face the X Men – a team of Madrid-based sports journalists, including the Guardian’s Sid Lowe – and a mysterious team of Spanish Existentialists. The X Men represented Jean-Paul Sartre, and the Existentialists Albert Camus. This was to be a game of not only of three sides and three teams, but of three halves.

Philosophy began intensely, defending the largest goal. The notion of ‘playing the way you’re facing’ was challenged by Kieran who was proving to be a dynamic force in the centre of midfield, constantly chopping direction of play and confusing the other two teams. The pressure began to tell and the X Men conceded all their goals in the first third, with Ally echoing Dad’s Army’s Private Frazer, shouting ‘they’re doomed!’ Owen, believing himself to be the Bruce Grobelaar of the 1980s, provided the team with reassuring calmness at the back. 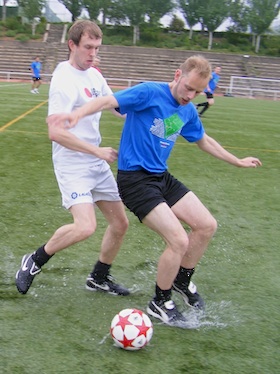 During the second third, Sartre and Camus formed and alliance and put sustained pressure on Philosophy, which led to a number of goals. This was in spite of Owen saving brilliantly time and time again, often from point-blank range.

In the third third, Henry broke his ‘duck’ (excuse the pun) for the club, and what a superb goal it was (ably captured on video by Filippo), completing a well worked combined move between the Philosophers and the Existentialists - a sweeping move that demonstrated the value of consensus between teams in this form of the beautiful game. The match finished with the X-Men conceding the fewest goals, winning the game 3-5-5. Doctor Sid took the honours of collecting the X-Men’s prize (a book by Albert Camus).

The delights of the city

In the evening we took a gentle stroll through the sights and smells of downtown Madrid. Jez made complimentary noises about beautiful TV hostesses in a quirky Iberian square. With heightened appetites and eager to sample the gastronomic delights of this world city, the Philosophers descended on a very busy and rustic tapas bar, one that was recommended by both Gaffer and Filippo. Both the service and dishes were fantastic, including gargantuan portions of patatas bravas, chorizo, tripe and squid. With his mind still focused on the lines of attack, but this time in a food context, Ally opined with conviction that ‘you need to have a strategy for tapas’. Deliciously clean home brew was brought to the table in copious amounts and poured into white china mugs. Local liquor followed the meal as a supposed nightcap. Moderation was not, however, on the agenda for most (including the Gaffer), and the evening continued until 5 a.m., taking in a Cuban dancing bar and club Samsara ... for Andy that evening, getting shut-eye was for losers. As he put it that evening ‘I am the stage’.

The next morning the procrastinating philosophers gathered at a very welcoming Ricci flat, where beautiful food was put on in the warm company of the Ricci family. There was much talk of PFFC past and present, together with some ideas of what to do for the Gaffer’s glorious 50th birthday celebrations later in the year.

Camus (The X Men, in white) won by 3-5-5, with Sartre (Spanish Existentialists, in black) and Monty Python (PFFC, in white) coming joint second.

Photo: Gregorio Ricci. Click on the image for a larger version.

Click here for the press release and pitch layout.

Three-Sided Football makes its first ever appearance in Spain this weekend (7 May), when Philosophy Football FC, the team which wears shirts adorned with the comments of famous philosophers about football, take on The X Men, made up of many of the foreign football correspondents in Madrid, including the Guardian’s Sid Lowe and Filippo Ricci of La Gazzetta dello Sport, and a mysterious team of Spanish existentialists in a unique Three-Sided Football match. Three-Sided Football was created by the Danish Situationist Asger Jorn, who sought an alternative to the adversarial and conflict-ridden nature of modern society. He found his solution in an unusual adaptation of the beautiful game. Played on a specially constructed hexagonal pitch, Three-Sided Football relies on cooperation rather than conflict between potential opponents, with the emphasis on forming alliances on the pitch and thinking deeply about tactics. Unlike conventional football, the winner is the team which concedes fewest, rather than scores most, goals.

In May 2010, Philosophy Football took part in a Three-Sided Football match in London organised in conjunction with the Whitechapel Art Gallery, during the British General Election campaign. They represented the Labour Party against the Conservatives and Liberal Democrats. It was Labour’s only victory of that period, as some truly philosophical defending kept a clean sheet against the Liberal Democrat-Conservative coalition which was about to start running the country. Click here to read about that match.

Will this match have a similar significance for football? The temperature has been rising in Madrid over recent weeks following several hostile ‘Clasico’ encounters between Real and Barca. Philosophy Football’s manager Geoff Andrews hopes the Three-Sided match will help to cool things down and provoke a more philosophical period of calm reflection. He says: ‘In Three-Sided Football, your opponent can be your friend. The referee is the guardian of justice and the players are free artists of the beautiful game’.

The match will be played at Stadio Centro Deportivo Municipal la Elipa in Madrid on Saturday 7 May (kick-off 13.00). Each team will represent three different philosophical positions. This sums up the dilemmas of the modern game, but also suggests the virtues of a change of tactics to accommodate the three-sided logic. Solidarity, satire and internationalism will be the three-sided logic for this historic occasion. The X Men will represent the thoughts of Jean-Paul Sartre, whose view was well-suited to the three-sided idea: ‘In football everything is complicated by the presence of the opposition.’ The Spanish existentialists will represent Albert Camus, concerned as always with the situation of the outsider: 'All that I know most surely about morality and obligation I owe to football.' Philosophy Football FC, from London, will revive Monty Python's classic International Philosophers' Football match between Greek and German philosophers.

Click here to see the match programme and brochure.

Rules of Three-Sided Football
1. Scoring
A team does not count the goals it scores, only the goals it concedes. The winner is the team that concedes the fewest goals.

2. Throw-ins / goal-kicks / corners
On the hexagonal pitch, each team has two sides of the six-sided pitch: the side with the goal (the 'backside') and the side opposite to your goal (the 'frontside'). If the ball goes out on one of your two sides, you get the throw-in / goal-kick. If it went out off you, the throw-in or corner goes to the team whose own goal is nearest to where the ball went out.

3. Referees
While there is a temptation to have no referees with the following dictat in mind: 'The game deconstructs the mythic bi-polar structure of conventional football, where an us-and-them struggle mediated by the referee mimics the way the media and the state pose themselves as "neutral" elements in the class struggle', the match will have two referees, able to make discerning philosophical judgements.

4. Duration of match
Ideally, teams will play until people get bored, start to wander off, fall asleep etc: however, three thirty-minute 'halves' with teams rotating goals would work well.